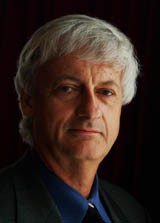 Andrew Miall has been Professor of Geology at the Department of Earth Sciences, University of Toronto, since 1979, where his focus is teaching and research on the stratigraphy and sedimentology of sedimentary basins. His particular interest is in sequence stratigraphy, the sedimentology of nonmarine sandstones, and their characteristics as reservoir rocks for non-renewable resources, and the nature of the preservation of time in the stratigraphic record. He was the inaugural holder of the Gordon Stollery Chair in Basin Analysis and Petroleum Geology, which was founded in 2001. He was elected a Fellow of the Royal Society of Canada in 1995. He retired at the end of 2020.

Andrew Miall was born and educated in Brighton, England, and completed his B.Sc. in Geology at the University of London in 1965. He emigrated to Canada in that year and joined the graduate research program in Arctic geology at University of Ottawa, gaining a Ph.D. from this work in 1969. He worked for several companies in Calgary and then joined the Geological Survey of Canada in Calgary in 1972 as a Research Scientist in the Arctic Islands section, working on a wide variety of regional basin studies. In 1977 he chaired the First International Symposium on Fluvial Sedimentology in Calgary, an initiative sponsored by the Canadian Society of Petroleum Geologists and which established a new theme of basic research endeavours carried forward by this major national society (the eleventh conference in the series returned to Calgary in 2017). Miall completed his Arctic work in the early 1980s after moving to Toronto, and has subsequently focused on field-based research in the Colorado Plateau area of the United States, together with projects in Asia and Australia. His work on the sedimentary facies, architectural-elements and facies models of fluvial deposits has been widely used, and he is a recognized authority on the theory and practice of sequence stratigraphy, and the historical evolution of the science of stratigraphy.

Reflecting his broader interest in energy and climate-change issues, from 1998-2013 Miall taught a popular science-for-non-scientists course at the University of Toronto entitled “Geology in Public Issues”, which deals with geological hazards, energy and water resources, and global change. From 2000-2004 Andrew Miall served as Canada’s representative to the NATO Science and the Environment Program’s “Committee on the Challenges of Modern Society”, during which time he assisted in the organization of several international workshops dealing with natural hazards.

Andrew Miall was Vice President of the Academy of Science of the Royal Society of Canada from 2005 to 2007 and President of the Academy from 2007-2009. He chaired the Program Committees which organized the Royal Society of Canada Annual Symposia on energy in 2003 and on water in 2006, and in 2009 he chaired the RSC Committee that held a one-day symposium in October to celebrate the International year of Astronomy, entitled “The universe and our place in it.” Andrew Miall has also served as a panelist at several symposia in the Program on Water Issues at the Munk School of Global Affairs at the University of Toronto, on such topics as carbon sequestration, shale gas and Canada’s oil sands.

In the fall of 2010, Miall served in a committee of six Canadian scientists enjoined by Environment Canada with the task of improving environmental oversight and management of the Canadian oil sands. This committee submitted its report in December, 2010. In January 2011, He was appointed to the Alberta Environmental Monitoring Panel, tasked with making recommendations for a complete overhaul of Alberta’s environmental monitoring work, with an initial focus on the Oil Sands. The final report was delivered on June 30th, 2011. In both cases, the objective of these committees was to develop world-class environmental monitoring and reporting practices, aimed at improving the management of air and water pollution, as industrial development activity in the oil sands increases in the coming decades. Most of the recommendations of these panels have since been implemented, resulting in significant improvements in the management of water and air pollution issues in the Lower Athabasca region.

Andrew Miall is the author of several research-level textbooks. His “Principles of Sedimentary Basin Analysis”, first published in 1984, is now in its third edition. A second book, “The geology of fluvial deposits: sedimentary facies, basin analysis and petroleum geology” was published in April 1996. A third book “The geology of stratigraphic sequences” appeared in the fall of 1996. A revised second edition was published in May 2010, and incorporated much new work dealing with the origins of sequences. His new book, “Fluvial depositional systems” appeared in the Fall of 2013. A completely new text, “Stratigraphy: A modern synthesis”, was published in January 2016. The lavishly illustrated book “Canada Rocks: The Geologic Journey”, authored by N. Eyles and A. D. Miall, appeared in the fall of 2007. This is the first treatment of the geological history of Canada prepared for a general readership. A revised edition was published in 2018.

Miall was Editor of the national Canadian journal Geoscience Canada from 1982 to 1989, and was Co-Chief Editor of the Elsevier journal Sedimentary Geology from 1987 to 2005. He completed a 13-year term as the Sedimentology editor for Earth Science Reviews in 2018..

Miall has been the editor of four technical books, plus many research papers. He was a Distinguished Lecturer for the American Association of Petroleum Geologists in 1986-1987. In 1992 he was named the Earth Resources Foundation-Esso Australia Distinguished Lecturer for that year by the Earth Resources Foundation of the University of Sydney, and toured Australia. He has also been a guest lecturer of the Academy of Science, China (1985), the Geological Society of South Africa (1979), and the Academy of Sciences, Poland (1978), a Visiting Fellow of the Japan Society for the Promotion of Science (1990), a Visiting Professor at the University of Alberta, Edmonton, Canada (1977), a sabbatical-leave visitor at University of Oxford, U. K. (1991-1992), and the Boyd Lecturer in Petroleum Exploration at the University of Texas, Austin (1995). He has lectured widely throughout Canada and the United States, and has also lectured, presented technology-transfer courses to petroleum-industry groups and undertaken consulting work in South Africa, Venezuela, Thailand, Malaysia, Japan, The Netherlands, and New Zealand. He has been a regular short-course instructor for the Canadian Society of Petroleum Geologists in Calgary since 2000.

Andrew Miall was awarded the Past President’s Medal of the Geological Association of Canada in 1983 and became a Distinguished Fellow of that society in 1995. In 1992 he was awarded the D.Sc. degree, a Higher Doctorate, from the University of London, and was awarded an Honorary Doctorate from the University of Pretoria, South Africa, in March 2001. In 2004 he received the American Association of Petroleum Geologists Grover E. Murray Distinguished Educator Award. He was inducted as an Honorary Member of the Canadian Society of Petroleum Geologists in 2012. In 2014 he was the recipient of the Francis J. Pettijohn Medal for Sedimentology, awarded by the Society for Sedimentary Geology, Tulsa, Oklahoma, and the Geological Association of Canada’s Logan Medal. In 2015 he received the Digby McLaren Medal in Stratigraphy, awarded by the International Commission on Stratigraphy. At the International Geological Congress at Cape Town, August 2016, he received the IUGS Science Excellence Award in Stratigraphy. His 2016 paper on unconformities was awarded the 2018 John W. Shelton Search and Discovery Award by the American Association of Petroleum Geologists.

Andrew is married to Charlene Miall, Professor of Sociology at McMaster University, with whom he is working on a project to investigate the evolution of the earth-sciences in Canada, with particular reference to environmental issues, such as global change. They have two adult children, Christopher Miall, and Sarah Kohlsmith, and four grandchildren, Meredith, Henry, Owen, and Nora.

Students please note that Prof. Miall is retired as of December 2020 and is no longer taking on new undergraduate projects, graduate students or visitors.

Miall, A. D., and Strasser, A., 2018, Editorial: Standards for publications in the field of basin analysis in Earth-Science Reviews: Earth Science Reviews, v. 177, p.1.

Lifetime publication and citation record (as of May 2022)

85 Refereed journal articles, 67 refereed contributions to books, etc., 7 authored books (3 in revised editions), 6 books edited; Google Scholar citation count: 30,203; h-index 65, i10 index 140. Google Scholar lists me as #2 in basin analysis, #4 in stratigraphy and #4 in sedimentology in global citation record. Research.com lists me as #28 in Canada amongst Canadian earth scientists, based on h-index, and #4 in Canada based on citations. This work has been recognized by four international awards since 2014, plus Canada’s Logan Medal.

Miall, A. D., 2006, Reconstructing the architecture and sequence stratigraphy of the preserved fluvial record as a tool for reservoir development: a reality check; American Association of Petroleum Geologists Bulletin v. 90, p. 989-1002.

Miall, A. D., 1994, Sequence stratigraphy and chronostratigraphy: problems of definition and precision in correlation, and their implications for global eustasy: Geoscience Canada, v. 21, p. 1-26.

Miall, C. E., and Miall, A. D., 2002, The Exxon factor: the roles of academic and corporate science in the emergence and legitimation of a new global model of sequence stratigraphy: Sociological Quarterly, v. 43, p. 307-334.

Miall, A. D., and Miall, C. E., 2004, Empiricism and Model-Building in stratigraphy: Around the Hermeneutic Circle in the Pursuit of Stratigraphic Correlation. Stratigraphy: American Museum of Natural History, v. 1, p. 27-46.

Miall, A. D., 1991, Hierarchies of architectural units in terrigenous clastic rocks, and their relationship to sedimentation rate, in A. D. Miall and N. Tyler, eds., The three-dimensional facies architecture of terrigenous clastic sediments and its implications for hydrocarbon discovery and recovery: Society of Economic Paleontologists and Mineralogists, Concepts in Sedimentology and Paleontology, v. 3, p. 6-12.

Miall, A. D., 2014, The emptiness of the stratigraphic record: A preliminary evaluation of missing time in the Mesaverde Group, Book Cliffs, Utah: Journal of Sedimentary Research, v. 84, p. 457-469

Miall, C. E. and Miall, A. D., 2008, Canada-wide survey of earth scientists: A preliminary report on the state of the discipline, the fossil fuel industries, and environmental science: Geoscience Canada, v. 35, p. 32-41.

Miall, A. D., and Miall, C. E., 2009, The Geoscience of Climate and Energy 1: Understanding the Climate System, and the Consequences of Climate Change for the Exploitation and Management of Natural Resources: The view from Banff: Geoscience Canada, v. 36, p. 33-41.