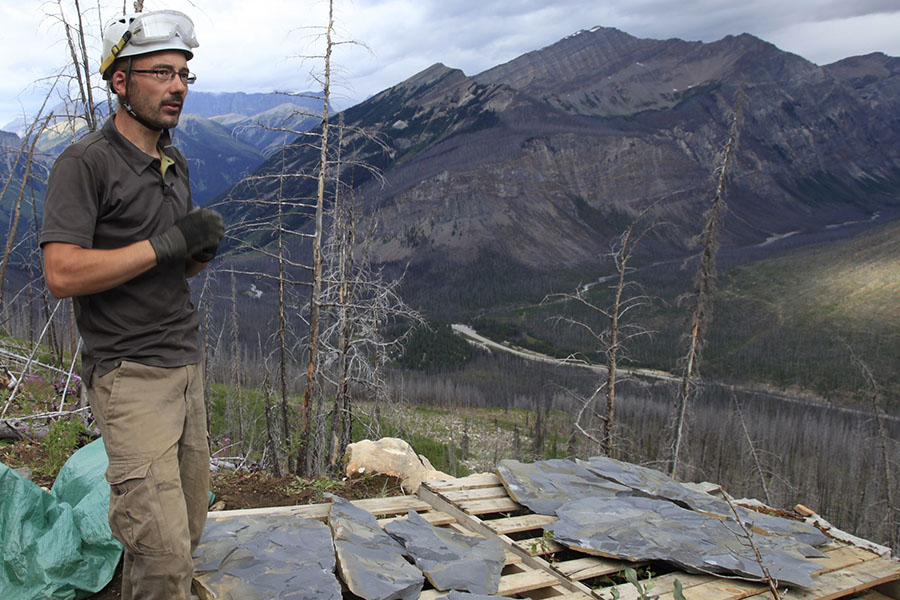 Jean-Bernard in the field in Kootenay National Park (summer 2014)

Dr. Jean-Bernard Caron is the Curator of Invertebrate Palaeontology at the Royal Ontario Museum (ROM) in Toronto, Canada. Dr. Caron studied the problematic animal Banffia constricta from the Burgess Shale for his Diplôme d’Études Approfondies (M.Sc. equivalent) in Palaeontology, Sedimentology and Chronology from the University Claude-Bernard in Lyon, France, before completing his doctoral dissertation at the University of Toronto in 2004 on the taphonomy and community palaeoecology of the Burgess Shale.

Dr. Caron’s research lab primarily focuses on fossilization processes, ecology, phylogeny, and diversity of Burgess Shale animals. Field-based research is an important aspect of his work and Dr. Caron leads regular fieldwork activities to the Canadian Rockies primarily to study how the Burgess Shale biota changed through space and time in response to ecological, evolutionary and environmental factors.

Dr. Caron’s research is principally funded by a Natural Sciences and Engineering Research Council of Canada discovery grant (2012-2017) and external grants including from National Geographic. He has published more than 35 peer-reviewed research papers including several in Nature and Science since joining the ROM in 2006. In 2010, Dr. Caron received the Pikaia Award for outstanding contributions to Canadian research from the Palaeontology Division of the Geological Association of Canada.

Public outreach – both scientific education and fundraising – are also important to Dr. Caron. At the end of 2011, Dr. Caron launched the award-winning Virtual Museum of Canada website on the Burgess Shale, a joint effort between the ROM and Parks Canada. The bilingual website has received over 200,000 visitors since its launch. Dr. Caron gives regular talks and interviews about his work, and has been featured in a number of TV documentaries including with Sir. David Attenborough. Dr. Caron continues to work on outreach projects, including the development of the ROM’s permanent Gallery of the Dawn of Life, for which he is the Coordinating Curator.

Links to Jean-Bernard Caron at the ROM

Other links to Jean-Bernard Caron at the University of Toronto: