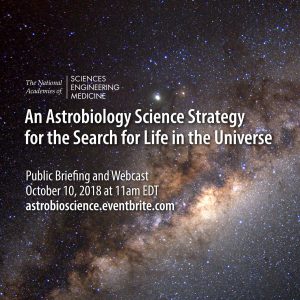 University of Toronto professor and earth scientist Barbara Sherwood Lollar is the Chair of the soon to be released report from the United States National Academies Space Studies Board “An Astrobiology Strategy for the Search for Life in the Universe.” Over the past year, in response to a congressional mandate to the NASA Science Missions Directorate, Sherwood Lollar led an international team of 16 including microbiologists, astronomers, geochemists, chemists and planetary scientists to conduct a major survey highlighting key scientific questions and technologies that are emerging and likely to shape the field of astrobiology in the coming two decades. The results of the study provide important input to the next decadal surveys in astronomy and astrophysics, and planetary sciences, beginning in 2018 and 2020, respectively. For more information see: https://astrobiology.nasa.gov/news/astrobiology-science-strategy-for-the-search-for-life-in-the-universe-2/
Astrobiology is the study of the origin, evolution, distribution, and future of life in the universe. The committee’s statement of task was to build on the foundation of and to update the NASA 2015 Astrobiology Strategy, emphasizing the latest scientific discoveries, conceptual developments and technology advances.
Dr. Sherwood Lollar will present the report’s findings at a closed doors briefing to the NASA Associate Administrator and Deputy Associate Administrator for Research Science Mission Directorate in Washington on Tuesday Oct. 9 2018 and later in the day to a Senate Subcommittee.