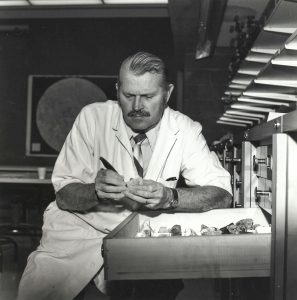 Professor Donald “Digger” Gorman was a highly respected mineralogist who taught in the Department of Geology (now Earth Sciences) for more than 40 years passed away on April 20, 2020.

After his retirement in 1988, his connection to the department and his former students and colleagues remained strong.  His story was featured in the 2018 and 2019 editions of the Alumni News and alumni contributors to the newsletter often told fond stories of experiences in his classes.

“Digger had great fun with his mineral tests. I still remember identifying one of his test samples as obsidian that was in reality a piece of a Coca-Cola bottle. Digger’s lessons taught us to watch for the fakes. Now it is my turn and I challenge geological promoters to identify a rock specimen mounted in my office.  The majority can not recognize a piece of concrete! Digger’s legacy continues.” </p

“I will always remember Digger Gorman as the teacher who inspired me the most. He stood out as the one professor who seemed genuinely interested in us lowly undergraduates. Fun times and great stories were a regular feature of his teaching. On one of his tests I remember being presented with an irregular soft tin white mineral that turned out to be a scrunched up mass of foil from the lining of a cigarette packet. It was along time ago now but I think he said that someone had given it to him to identify when he was up in the Arctic.”

“Professor Gorman (Digger) was a truly remarkable colleague and friend. His impact on students as a teacher, mentor and friend set a standard that many would try to emulate but non could match. This is attested by letters written from across the country and around the world to the U. of Toronto Department of Earth Sciences (formerly Geology) in the past few days. In due course we hope to post these tributes on this webpage.”

“An exceptional guy!  He was a professor in the very best sense of the word; totally dedicated to teaching and to training student in the most fundamental of skills- visual mineral identification. I believe this one reason so many students from his era in the Dept. went on to do such great things.”

“For me, Dr Gorman stood out as one of those special bright stars among a galaxy of stars. He will be missed.”

“With this pandemic the world is very much a different place, though provides a time to reflect I guess. I barely crossed over with Digger when I first started my PhD in Toronto in 1985. He was still active then and I did get to meet him, but did not know him personally. But I do remember many people spoke fondly of him and what I liked is that he was very straight up and honest, and did not ‘play games’ as far as I knew.”

“Twenty-five soft white minerals and how to identify them; a penny can stain a mountainside; the most profitable mining operations in Canada are the gravel pits just north of Toronto.  Little but not so little things I remember over 40 years later.  A warm, witty smile; great stories; a sincere interest in each and every student who showed interest.  Those are my memories of Dr. Gorman.  Great teacher, great guy.”

“I remember him well. On the side, I  had an extra-curriculum job identifying minerals for a junior mining company. There was one I could not identify by XRD. I took it to Digger, who immediately identified it as some obscure sulpho-salt from some place in Mexico. I went back and checked the pattern. He was correct. I impressed the company with “my identification”. Although, in fact, his breadth of knowledge had impressed me a great deal more. I was amazed.”

“An exceptional guy!  He was a professor in the very best sense of the word; totally dedicated to teaching and to training student in the most fundamental of skills- visual mineral identification. I believe this one reason so many students from his era in the Dept. went on to do such great things.”

“How often we will need the old saw – better the quality of life rather than longevity.  He served all of us with integrity and structure.  I can really, however, only identify about 4 minerals.  I did not take his courses.”

“I have very fond memories of Digger, who’s office was just across the hall from the one I occupied with several others in the old mining building. He had an encyclopedic knowledge of mineralogy and helped me a lot; and, to boot, he was truly one of god’s own gentlemen. One of the nicest persons you could ever wish to meet. Digger was the kindest, most helpful guy in the department. He helped me with identification of a particularly vexing, conchoidally fracturing blackish vein-filling mineral hisingerite. His knowledge of minerals was encyclopedic.”

“I first met Digger 50 years ago. I never met anyone who loved geology more than Digger.”

“I have very fond memories of Digger as one of my undergrad teachers, with his euhedral caramel “surprise” mineral on our test. I am amazed to learn that he has still been alive and alert all this time later!”

“I will never forget Digger and hope to be able to attend the memorial.”

“I do remember two things about him. I think it was the first year I worked in the probe lab and someone from outside the Department had brought a sample for identification: it had lead pellets scattered around in some kind of matrix  and I had no idea of what  might be. So I went to see Digger for mineralogical help and he right away said “Drilling mud” or something to that effect. I thought of him strictly as a mineralogist so I was pretty impressed.

The other memory has to do with the German language bookstore that – you may remember –  once existed just north of College, on the east side of Spadina: Digger was pretty adamant they were communist spies!”

Digger was a great prof and an inspiring man. He will be missed and remembered with fondness.

“All of us from the third floor of the old Mining Building got to know Digger quite well.

I learnt all about patience, Stokes Law and how long it took to isolate the less than two micron clay sized fraction from him.

He even paid me for the experience!”

“Words cannot adequately express my dismay on receiving this note. Digger ,whose Mineralogy classes I took in 1955-56, and for whom I was a lab assistant in in  57-58 , while I was pursuing (under Prof Nuffield ) an MA in x-ray mineralogy,  will always stand out in my numerous recollections as that rare mentor who shaped my development and  motivation, as he did for so many students who had  the good fortune to study under him. His incisive and boundless wit; his talent for motivating his students while simultaneously  maddening us with things like his “white mineral”  test; his love for his field, and boundless energy in pursuit of knowledge;  and most of all, his approachability and genuine interest in each of his students: these dwell sharply and unforgettably in our memory. For me, he will always be unique and treasured.”

“As an undergraduate and graduate student at University of Toronto’s Department of Geology in the late 1960s and early ‘70s, I was fortunate enough to have experienced not only Dr. Gorman’s infamous mineral identification courses, but also his infectious enthusiasm for minerals, geology, field work and the mining industry.  There was very little to which he couldn’t add an extra dimension, in particular a human one, through his recounting of a multitude of personal experiences.  Indeed, several of his anecdotes have remained in my mind to this day.

“There is little question that Digger’s fervour in all things geological, in addition to his ability to relate to his students, influenced the decision of several from my graduating year, myself included, to choose the minerals industry as a career.  In the following years, I often contacted Dr. Gorman as the one at U of T who would go to great lengths to find students for prospective summer field employment.

“I’m sure that many others can relate Dr. Gorman’s numerous public service contributions, including his association with Toronto’s Walker Mineralogical Club, much better than I.  However, he was well known in mineralogical circles for the tremendous amount of time he gave over many years at the annual Rockhound Gemboree in Bancroft.”

“I was in 4th year at UofT and walking down the corridor in the creaky old Mining Building.  Digger was just coming out of his office and he spotted me.  “Keith, Keith!”  He said, emphatically but in a rather lowered voice.  I looked up.  He quickly motioned me into his office and shut the door behind us.  He said, “I’ve got something to show you but you must keep it secret!”  I had no idea what he was talking about, but I consented.

He had a large steel safe in his office, and he turned with his back to me and worked the combination.  Then he swung the door open, and with difficulty removed a couple of small but obviously heavy wooden boxes.  He told me that the company which owned the Hollinger Mine in Timmins was being wound up and the only gold they still held were some museum-quality specimens that were kept in the safe at the headquarters of the company.  Digger had been engaged by the company to value the specimens and solicit potential buyers from museums, or private collectors.  Out of the small wooden crates he produced box after box of spectacular flashy gold specimens, all of which would have been a credit to any museum collection.  My jaw literally dropped to the floor.  I couldn’t believe it, and especially that he had it in the Mining Building!  The specimens were up to double fist size and all were more or less greater than 50% yellow gold.

He swore me to secrecy as he parcelled them back up and put them in the safe, and I never told anyone for a couple of years afterwards.  I ran into him in the hall later that year and quietly asked him what became of the collection.  Sadly, he said that all of them had gone off to the refinery.  He had talked to museums all over the world but it was too much money for them to manage the purchase, though many said they would give a juicy “tax credit” to the owners if the collection was donated – not much use to a company being dissolved.  What a loss, and it must have been even more heartbreaking for Digger!”

“Even 51 years after  Digger’s mineralogy classes I still have vivid memories  of the infamous “white mineral tests”.
And then there was the non-mineral test with ambergris, silicon carbide, concrete. plastic products, etc.
For the record, Digger always promised a case of 24 to any student who scored  100  on any of his tests. Does anyone have a record of how many cases were paid over his lifetime?”
Cam Allen B.Sc. 1970;M.Sc. 1972