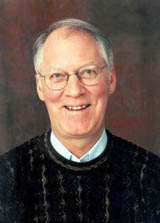 Steve Scott is the Dr. Norman B. Keevil Professor Emeritus of Ore Genesis Geology, McRae Quantec Emeritus Professor of Geology, past Chair of Geological and Mineral Engineering (now Lassonde Program in Mineral Engineering), past Chair of the Department of Geology (now Department of Earth Sciences) and Director of the Scotiabank Marine Geology Research Laboratory. He studies present-day geological processes on the modern ocean floor and relates these to ancient features that are now on land. A primary, but not exclusive, focus is comparative studies of modern and ancient deposits of base and precious metal sulfides and other hydrothermal products. He is the co-discoverer of the Solwara 1 seafloor massive sulfide deposit offshore Papua New Guinea that is being prepared for mining by the Canadian company Nautilus Minerals. Being retired, Steve no longer supervises graduate students or postdoctoral fellows but he welcomes collaboration with sabbatical and other visitors.

Over a 45 year career, Steve and his research teams have worked in the Atlantic, Indian and Pacific Oceans and on ore deposits of five continents. A current research focus is the role of magmatic fluids in the formation of modern and ancient volcanic-hosted massive base and precious metal sulfide deposits on the ocean floor. To this end, he is developing a new analytical technique using Time of Flight Secondary Ion Mass Spectrometry (TOF-SIMS) analyses of melt inclusions that store miniscule samples of magmatic fluid in phenocrysts of volcanic rocks.

Professor Scott was educated at the University of Western Ontario (now Western University; BSc and MSc) and the Pennsylvania State University (PhD). He holds an honorary doctorate from the Université de Bretagne Occidentale in Brest, France and an Honorary Professorship from the China University of Geosciences in Beijing.

Professor Scott is a consultant to the marine mining industry. As well, he does numerous interviews with media and outreach presentations to all age groups across Canada on the deep sea and ocean mining. He and his wife, Joan, live in Toronto and on the Brittany seacoast of France.